Paris (France) / Saint-Imier (Switzerland), July 5, 2015 – Over 3 days, the Champ-de-Mars reunites some of the world’s best riders and horses, as well as renowned amateurs for the Longines Paris Eiffel Jumping, 8th stage of the Longines Global Champions Tour. This 5* show jumping competition, to which the Swiss watch brand lends its name, was marked yesterday by the victory of Irish rider Bertram Allen on Romanov at the Longines Global Champions Tour Grand Prix of Paris – the highlight trial which captivated the numerous spectators gathered for this high-level show.

This weekend, the best riders and horses are gathered in the French capital for the Longines Paris Eiffel Jumping, the eighth stage of the Longines Global Champions Tour. A massive crowd of equestrian sports enthusiasts attended this top-level show held in the very heart of Paris, in front of the emblematic Eiffel Tower. On Saturday, after a thrilling trial, Bertram Allen on Romanov won the Longines Global Champions Tour Grand Prix of Paris, followed by Diniz Luciana (Portugal) on Fit For Fun 13 and Darragh Kenny (Ireland) on Sans Souci Z, who finished second and third respectively.

For the second year running, the Longines Paris Eiffel Jumping is included in the Longines Global Champions Tour (LGCT), a prestigious 15-stage tour of which Longines is the Title Partner and Official Timekeeper since 2013. In addition, this 5* show jumping event, the highest category in the FEI’s hierarchy, counts towards the world’s ranking of the discipline: the Longines Rankings. This event is the perfect opportunity to discover the Longines DolceVita collection, inspired by the Italian sweet life. Since its inception, this line has illustrated worldwide the brand’s contemporary elegance and is worn on the wrists of women who know how to make the most of life’s simple pleasures. As a tribute to those women, Longines has decided to offer a new interpretation of this collection, subtly combining geometric lines with soft curves. The Official Watch of the Longines Paris Eiffel Jumping, decorated with diamonds and cased in steel, features a silver-coloured “flinqué” dial adorned with painted Roman numerals. Driven by their quartz movement, the blued-steel hands point to the passing hours and minutes. This timepiece is mounted on a stainless steel bracelet. Longines becomes the Title Partner of the Longines Masters 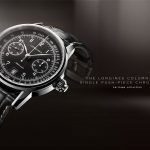