Ascot (UK) / Saint-Imier (Switzerland), 17th June 2015 – Longines Ambassador of Elegance Simon Baker joined the brand for a day at the races as Longines commemorated nine years of being the Official Timekeeper of Royal Ascot, as well as its Official Partner and Watch. 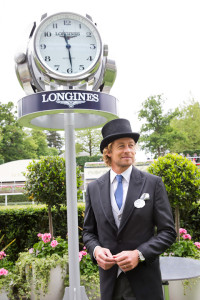 On Tuesday, the owners of Gleneagles, the winning horse at The St James’s Palace Stakes, received an elegant Longines watch from the hands of His Royal Highness The Prince of Wales and Her Royal Highness The Duchess of Cornwall. In addition, Longines Vice President and Head of International Marketing Juan-Carlos Capelli presented a watch to Ryan Moore, the winning jockey of The Ascot Stakes. Owner, trainer and lad of Clondaw Warrior, the winning horse of this race, were presented with refined Longines watches as well.

Australian actor Simon Baker, who has been an Ambassador of Elegance since 2012 and perfectly embodies Longines’ slogan “Elegance is an Attitude”, enhanced Wednesday’s race day with his presence.

Longines is the Official Timekeeper as well as the Official Watch and Official Partner of Royal Ascot with the brand having enhanced on course presence including a branded chronometer close to the winning post. Renewing a partnership that began in 2007, the Swiss watchmaker will continue to add a touch of elegance and style, synonymous with the prestige of the Royal Meeting.

Royal Ascot is the perfect venue for the Swiss watchmaker to present its new Conquest Classic Moonphase chronographs featuring a moonphase display. The sophistication of these timepieces makes them eminently refined watches and echoes the excellence and elegance of the stars of the equestrian universe. Longines’ passion for equestrian sport dates back to 1878, when it produced a chronograph engraved with a jockey and his mount. Seen on the racetracks as early as 1881 and extremely popular among jockeys and horse-lovers, this model enabled its user to time performances to the seconds. In 1912 already the company partnered for the first time with an international show jumping competition. Today Longines’ involvement in equestrian sports includes show-jumping, flat racing and eventing competitions. 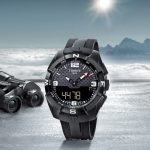 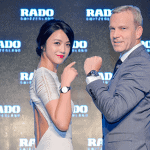 A striking couple of watches